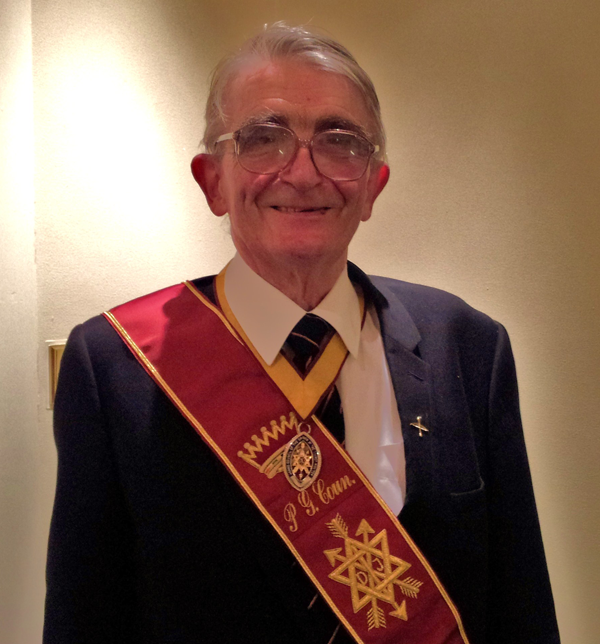 At a meeting of Evergreen Remembrance Conclave No. 229 meeting at Stirling Road, Birmingham on Wednesday, 25th July 2012, John was honoured with a celebration of attaining 40 years in the Order of the Secret Monitor.

The meeting was attended by a good number of Brethren from all over the country. The numbers were such that the meeting had to be transferred from the normal Lodge room to the main temple.

John was noticeably a little embarrassed at times when he thought he had monopolised the conversation but needed little encouragement to start again.

The discussion concluded with the Grand Supreme Ruler commenting on how worn John’s Grand Conclave sash was. He then immediately gave John a field promotion to ‘Past Grand Counsellor’ and presented and invested him with a new sash.

After the meeting eighty seven brethren sat down to a most excellent and buoyant festive board during which John was presented with a cake, a cut glass decanter and glasses and a bottle of Gin to help christen them.

The Conclave also made presentation of gifts to the Grand Supreme Ruler and his Deputy which were gratefully received.

The final toast of the evening: that to the visitors was given by R.Wy.Bro. John Tewson in a typical manner. He walked up and down the top table introducing and making comments about each in turn. We were left in no doubt that John could have gone around the whole room doing the same but due to the time limited himself on this occasion.

Wy.Bro. Alan Howls of Shropshire Conclave No. 268 replied on behave of the visitors who summed up all the brethrens feelings about the evening in general and John in particular in an excellent manner.